JONATHAN’S MISSION: to bring Modern American Glamour to your life. How? By creating a foundation of timelessly chic furniture and accessorizing with abandon.

It all started with pottery. Jonathan first gave the wheel a spin
at summer camp when he was 12 years old. He was obsessed
with clay the moment he touched it, and spent the rest of his
summer behind the wheel.

Ostensibly in college at Brown University, he spent most of his time
at nearby Rhode Island School of Design making pots. His RISD
pottery—Chanel inspired teapots and updated takes on Sevres
urns—reflected his interests in pop culture, bling, contemporary
art, and fashion. His professor encouraged him thusly: “You have
no talent. Move to New York and become a lawyer.” 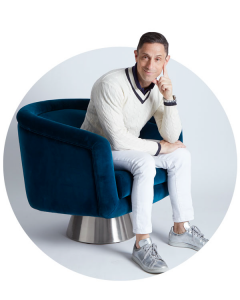 He followed through on the first part for three years, assisting
tyrants in the entertainment industry before realizing his pottery
teacher’s approval meant nothing.

Jonathan started teaching classes at Mud, Sweat ‘n’ Tears in New York City in exchange for free studio space. After successfully cold-calling the buyers from Barneys New York he dove into production—rollerblading to the studio at 6 a.m., making a hundred mugs, and coming home to fall asleep.

Eventually he partnered with Aid to Artisans, a non-profit  rganization devoted to helping crafstpeople in developing countries by connecting them with designers in America. While in Peru, he fell in love with South American textiles and started designing pillows, throws, and rugs. He fused his modern sensibility with the soulful work of the people of Peru.

Jonathan opened his first store in Soho in 1998. Figuring “why stop at pots,” he partnered with his Peruvian pals on throw pillows, and then started imagining the sofas those pillows could sit on. Soon enough he was in the home décor biz—working with artisans of all kinds to craft everything from swanky side tables to divine dinnerware to custom upholstery.

He took his signature style out of the store too, tackling interior design projects for private residences, restaurants, and hotels, including the beloved desert destination, The Parker Palm Springs Hotel, and the Eau Palm Beach Resort and Spa.

In less than 20 years he’s opened nearly 30 stores. His favorite motto, “If your heirs won’t fight over it, we won’t make it,” reflects his continued commitment to impeccable craftsmanship and irreverent luxury. But his love of pottery remains at his core: his oce sits between a giant kiln and a working pottery studio.

WE BELIEVE that your home should make you happy.

WE BELIEVE that when it comes to decorating, the wife is always right. Unless the husband is gay.

WE BELIEVE in carbohydrates and to hell with the puy consequences.

WE BELIEVE minimalism is a bummer.

WE BELIEVE in being underdressed or overdressed always.

WE BELIEVE dogs should be allowed in stores and restaurants.

WE BELIEVE our lighting will make you look younger and thinner.

WE BELIEVE in highbrow books and lowbrow music.

WE BELIEVE subversive is superior.

WE BELIEVE in irreverent luxury.

1984-88 -Allegedly studies semiotics and art history at Brown but actually spends all his time at RISD making pots.

1989 -Makes quilted line of pottery inspired by Chanel. Evil professor advises him to bag a pottery and try a career in law.

1990 -Moves to New York and starts working in the movie business.

1993 -Deeply depressed from three years in the movie business (as anyone would be), quits. Tells parents he wants to be a potter and starts Jonathan Adler, the company—vows never to have a real job again. Concerned parents schedule an intervention.

1994 -Shows pots to Barneys and gets an order. Realizes he has to make the pots.

1997 -Realizing he’s but one man, hooks up with Aid to Artisans, a non-profit organization that connects artisans in developing countries with American designers. Flies to Peru and discovers paradise—a beautiful workshop by the sea with parrots, gardens, and incredible craftsfolk. Creative explosion ensues.

1999 -Adopts (with his partner Simon Doonan) a Norwich terrier named Liberace who is the light of their lives.

2000 -Millennium madness. Luckily Y2K has no impact on pottery wheels.

2005 -Writes first design book. Jewish mother proud, but Liberace remains aloof—he is, after all, a terrier.

2007 -Joins the Bravo family as lead judge on Top Design. Wanders the streets in outfits borrowed from the show hoping to be recognized.

2008 -Gets hitched to Simon. Liberace purchases something o-registry.

2012 -Opens his 20th store. Figure destroyed from local delicacies near each store location—scones and clotted cream in London taking the brunt of the blame.

2016 -Joins Fisher Price as Creative Director, providing a legitimate excuse to play with toys. Snuggles with his newly adopted mutt Foxylady (and occasionally Simon). The late, great Liberace smiles down from the big dog park in the sky.